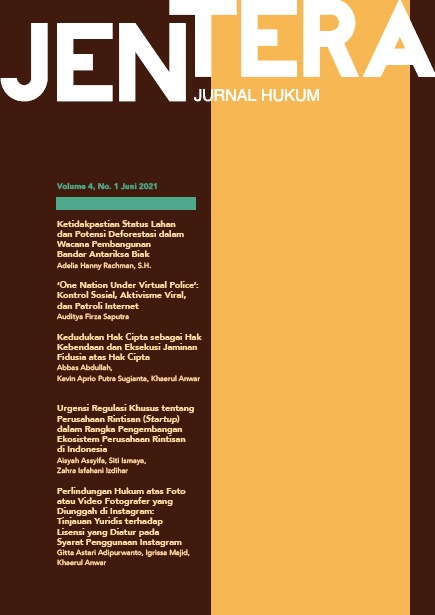 This paper examines the systematic consequences of a virtual police presence on viral activism. The trend of a viral phenomenon on social media works as a manifestation of citizens’ social control by creating mass pressure and humiliation as its social sanction addressed to deviations or carelessness of public officials. The authorities tend to equate the social sanction method as defamation or hate speech, so a punitive approach is to handle viral cases. Even though the context is citizen participation to exercise social control, uploading viral information is ultimately not free from legal risks. Its treatment is different from the activity of the press, protected by immunity. The presence of cyber patrols increasingly makes netizen activism recede because the virtual police’s authority
to reprimand and instruct content removal will hinder the delivery of viral information, which is intended to garner public control. Even though there are slices in the aspect of ‘public interest, in viral activism with journalism activities, there are differences in treatment between journalistic and non-journalistic products. An alternative policy that can be taken is to expand the protection of the press regime to include viral activism to avoid potential criminalization.